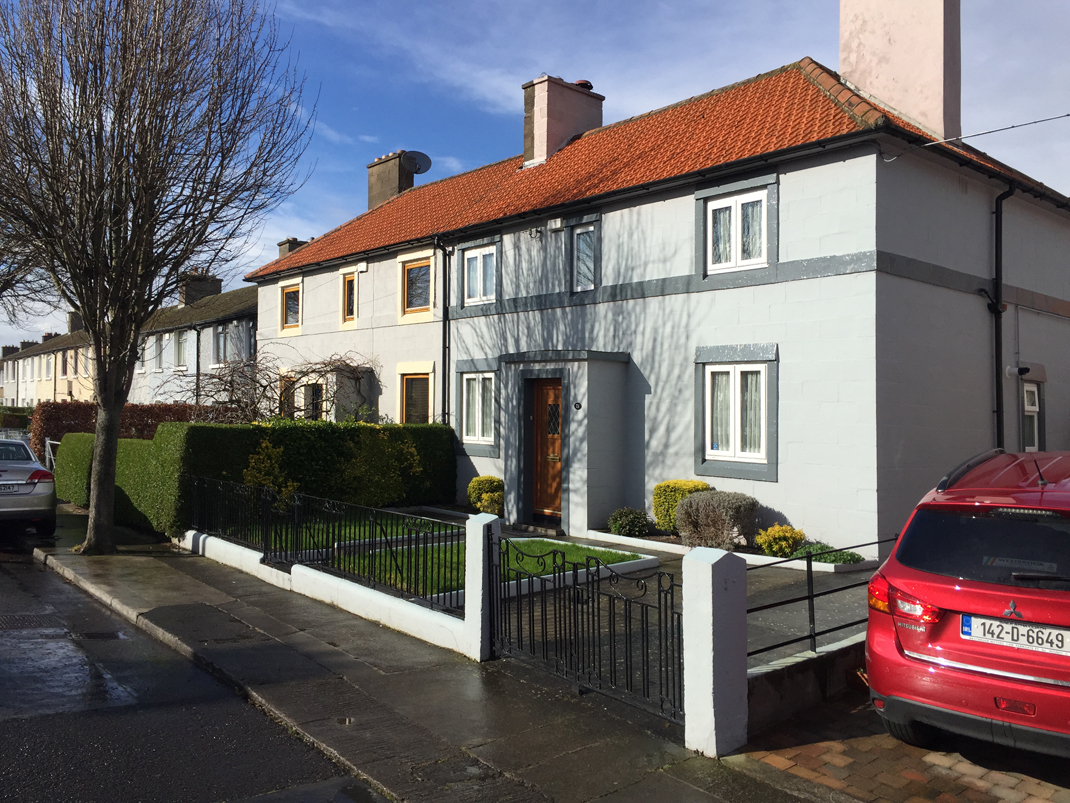 A large element of the character of Marino comes from it’s varied and unique roof lines generated by a variety of materials, roof types, features that follow the curving pattern of the roads and step with the levels of the area. A variety of roofing materials were used which emulated the style of estates at Roehampton and Becontree, London which clearly influenced the Dublin City Council architects at the time (for more details see here).

Natural and fibre slate was the most common roofing material used in the area. In contrast, full two-storey houses with striking terracotta orange clay tiles was used to define Marino Park (“Bottom Circle”), the nodal crossroads along Brian Road as well as being used in other isolated areas. 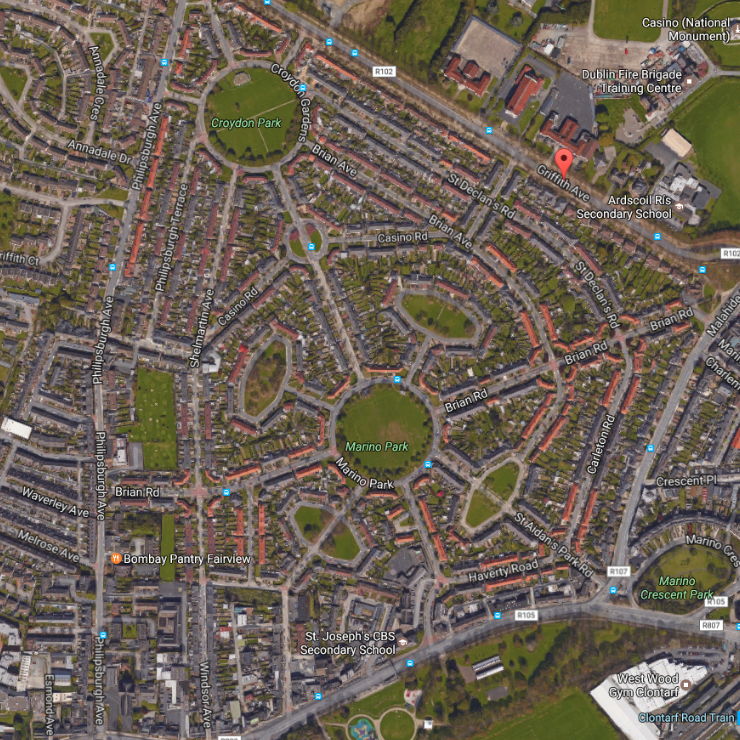 Fibre (asbestos) cement slate appears to have been used in the later phases of the estate in both horizontal and diamond pattern. Marino dates from a time of transition form traditional to modern building construction and the variety of materials is of interest. Above: A mansard terrace under construction 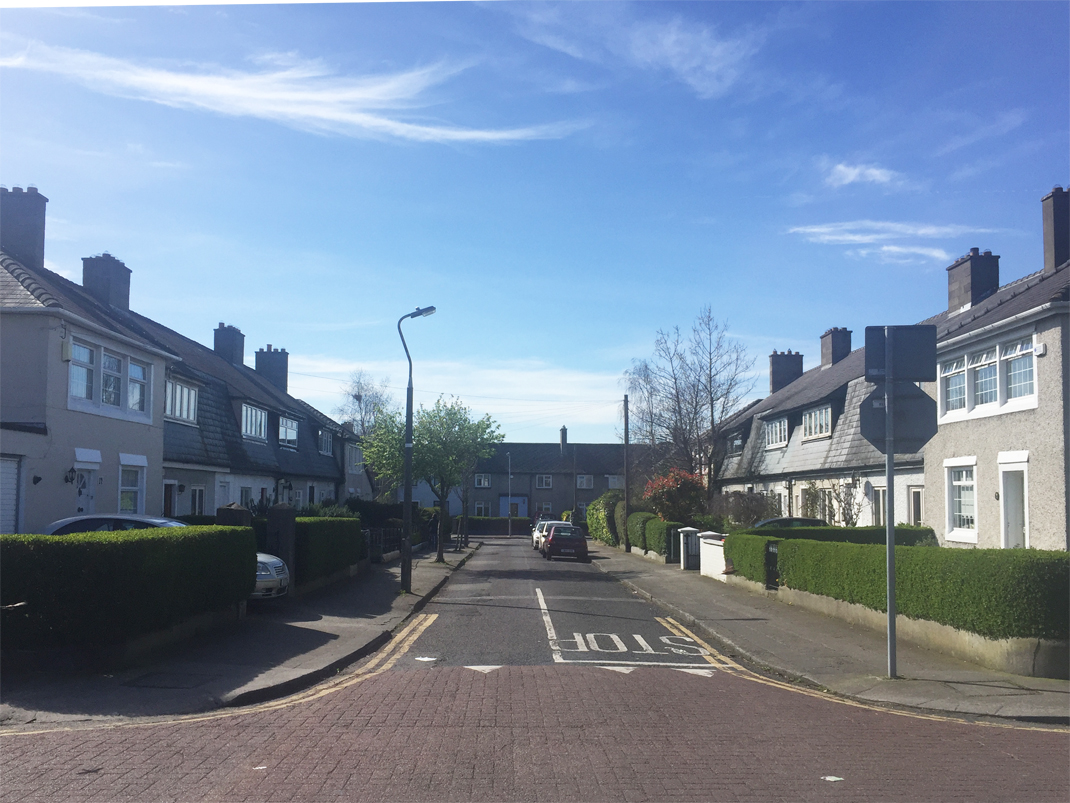 Some details are worth considering if you are doing work to your house. The roofs were built before the advent of modern roofing felts/underlays and were “parged”, i.e.: sealed with lime mortar to the underside of the slates. Re-roofing will generally involve the removal of the parging and the introduction of a new roof underlay. Don’t panic if the parging is falling off your roof: the overlap of the slates provides the main weathering to the roof.

The orange terracotta clay tiles are not generally fixed/nailed: they are hung on the roof battens with their own weight and gravity keeping them in place. So far so good I suppose but worth considering if you are looking at alterations to the roof.

The original window frame to the mansard-type windows acted as part of the framing to the opening. Often this original frame is left in place when windows are being replaced to maintain the integrity of the mansard structure. Above: Re-slating of a mansard roof in progress. The internal plaster was originally laid onto a layer of expanded metal to the inside of the rafters

Many of the houses feature a cast concrete eaves (as opposed to a conventional timber-framed fascia & soffit). If external insulation is being considered, it is worth checking with the contractors how this detail is going to be approached. If the eaves is left uninsulated, it will leave a large area of cold bridging in the house where condensation and mould can occur internally. 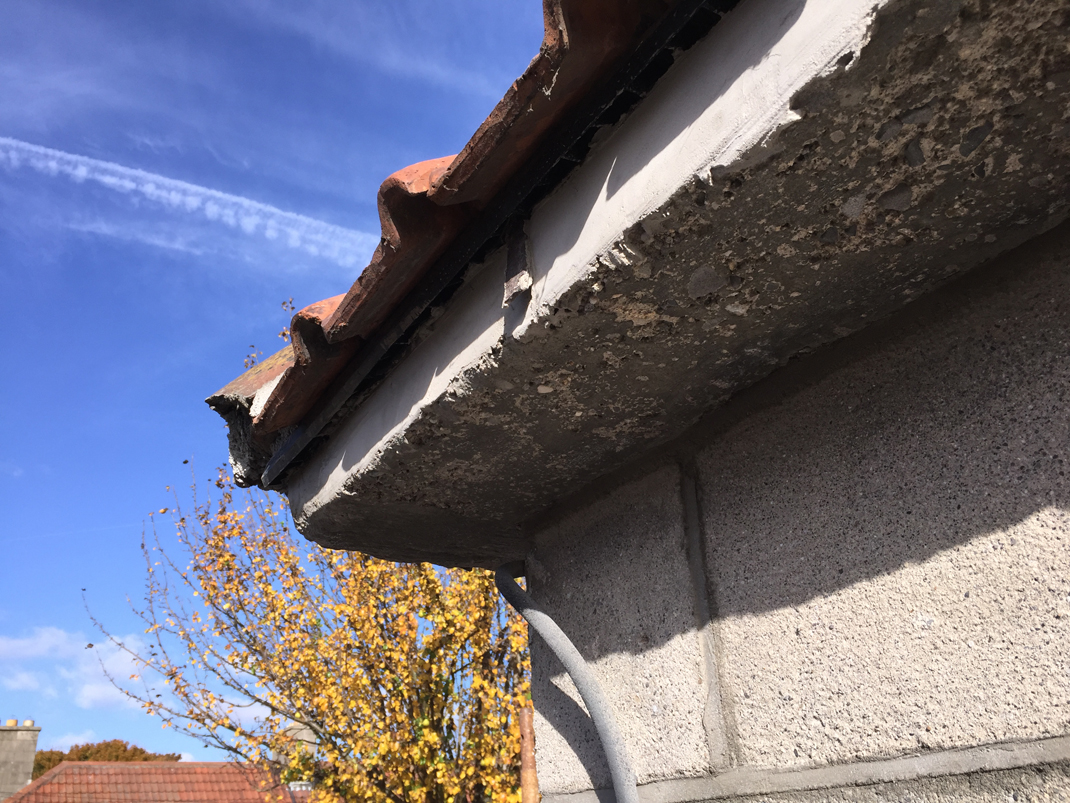